When you’ve got a reputation for making exquisitely designed notebooks and drawing pads, to launch your latest collection of travel gear a starchy press release just won’t do. So when Moleskine debuted its travel collection (originally announced at Milan’s Design Week), gear that is handsome enough to sit in a museum, they hooked up with Eyebeam Art + Technology Center and put on an all day workshop and interactive art exhibit to show that they’re more than just sweet looking notebooks.

Earlier this month, Moleskine and Eyebeam Art + Technology Center put on a joint exhibit called Objectivity where they asked guest to re-imagine Moleskine and use their iconic notebooks and pads as inspiration for art that combined both old and new technology; most importantly, they encouraged viewers to participate.

SHIFT, another interactive installment, used a combination of stitched together hand drawn images projected onto a white wall in the gallery. As you moved closer to the wall, the image would change and, well, shift, revealing hidden artistic gems hidden by the projection. Once there you could admire the work of others or pick up one of the many carefully placed Moleskine pencils and leave your mark on the world. SHIFT, by Mark Parsons, was one of the two workshops held earlier in the day. It was an interesting take on analog and digital art coming together and being better than the sum of its parts.

The other workshop for the event was lead by fashion designer and Eyebeam alum, Diana Eng had participants hack a Moleskine and build their own custom electroluminescent notebooks. Personally, this was the most eye-catching exhibit of night. What was most impressive was that most of the participants had never worked with a soldering iron much less create working animated electroluminescent notebooks. Giovanna Signorini, an architect by trade, participated in the notebook hacking workshop and couldn’t stop speaking positively of Eng’s patience with her group.

Though it was easy to get lost in the amazing works of art throughout the gallery, subtle and lasting reminders of the real star of the show were omnipresent. Workstations were generously stocked with Moleskine pads, the new roller pens, and prominently on display, the new messenger bags with designs by artists from the Parsons School of Design.

Moleskine provided an experience for people to not think about art as stagnant or even technophobic but to view art as living beyond the page. Hmmm… sort of where Moleskine is going with their newly launched (in the US) travel collection.

Check our gallery of some shots of the event: 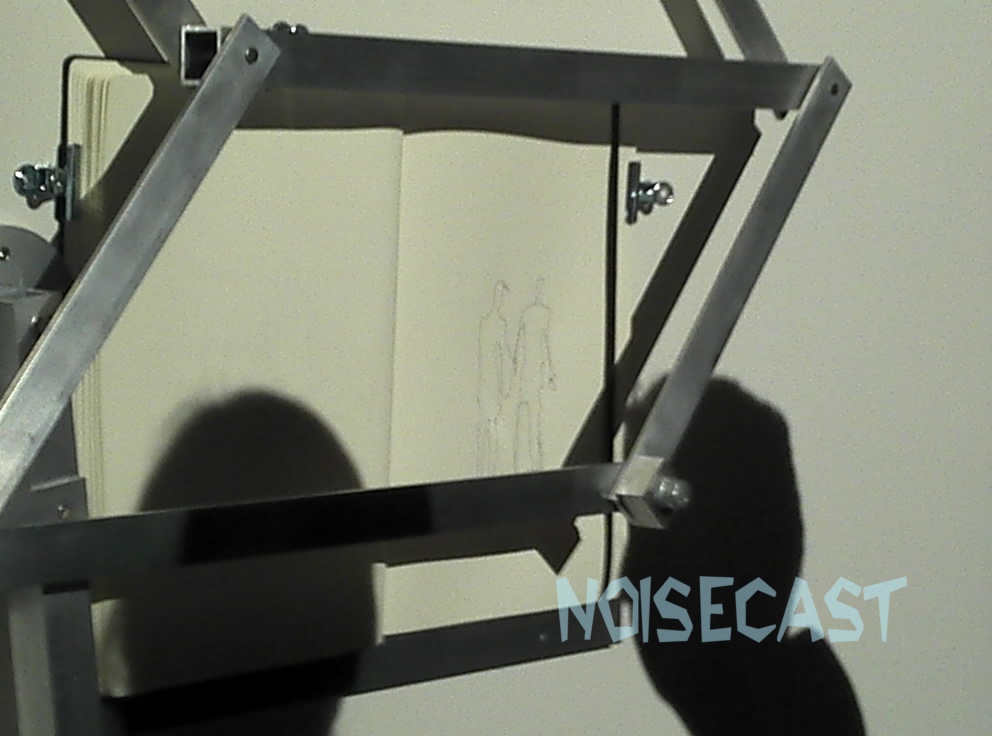 For more hi-res shots of Objectivity, be sure to check out Moleskine’s Flickr page.